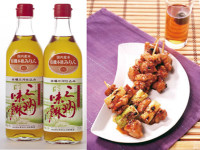 Our company has been brewing mirin in our factory in Mikawa, Aichi prefecture since 1910, produced traditional recipe and carefully aged for two years. We continue to produce genuine mirin over 100 years, using sticky rice, whose deliciousness is enhanced only by our own traditional brewing technique. Mikawa region has rich culture and is the finest mirin in Japan. Mirin was originally brewed as a popular sweet rice wine drink 500 years ago.

Traditional method is a tradition of Japan. High-quality glutinous rice, a raw material, is steamed in a Japanese-style oven. Prepared unrefined mirin is saccharified and matured for a long time. This is the original manufacturing method for mirin using spirit made by simple distillation process (rice spirit). It takes two years to complete brewing and maturing.