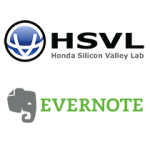 The Evernote Devcup, which kicked off this past Sunday, is a six-month program featuring a series of in-person and virtual events that encourage developers from all over the world to create new apps on the Evernote platform.
Evernote anticipates there will be more than 2,000 participants in the 2013 Evernote Devcup who will create and submit more than 200 apps over the next several months. The Honda Innovation Award-winning team will be chosen in mid-August and then go on to compete against other category winners at the Evernote Conference Devcup finals in San Francisco in late September.

“We’re very excited to partner with Evernote in the effort to create new value and joy to our customers’ mobility experience through the development of new mobility apps,” said Nick Sugimoto, senior program director of Honda Silicon Valley Lab.

“The Evernote Devcup brings together teams from all over the world to create inspired integrations with the Evernote platform,” said Seth Hitchings, VP of Platform Strategy for Evernote. “Partnering with HSVL will give Devcup participants the very cool opportunity to develop for Honda’s concept mobility experience. We are very excited to see the what the intersection of Honda innovation and Evernote will bring to Devcup.”

More information about the Evernote Devcup including submission dates and in-person events around the globe can be found at devcup.evernote.com.

About HSVL
The Honda Silicon Valley Lab is a division of Honda R&D Americas, Inc., the North American research and development subsidiary of Honda R&D Co., Ltd. HSVL was established in May 2011 in Mountain View, Calif. as an open innovation lab for global Honda R&D focused on information technology. HSVL interfaces with a broad spectrum of IT innovators, from large, well established companies to small startup firms and individuals. The recent integration of Apple Siri Eyes Free into certain Honda and Acura vehicles is a recent example Honda’s effort to lead the industry in bringing new information technology into its products. For more information, please visit hondasvl.com.

About Evernote
Evernote is helping the world remember everything by building innovative products and services that allow individuals to capture, find and interact with their memories. Evernote apps are available on all major computer, web, mobile, and tablet platforms. For more information, please visit evernote.com.