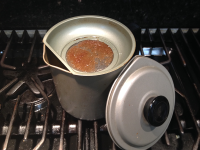 Japan’s government is working with an environmental group in China to turn used cooking oil into soap in a bid to reduce water pollution.

The government gave a grant of around 100,000 dollars to the group for a project modeled on one at Lake Biwa in western Japan.

The group installed four processing machines in the cities of Beijing and Tianjin.

Media observed a demonstration of the process in the Tianjin economic and technical development zone on Wednesday.

Experts from Japan showed how to use the machine to heat waste oil. When caustic soda and water are added to the oil, soap is created.

A representative of the group says the project can raise public awareness about environmental protection in China.

A senior official from the Japanese Embassy in Beijing, Naomi Inoue, said the government will proceed with the project despite political difficulties between the 2 countries.

The disposal of cooking oil affects the environment and drinking water in China, where many households and restaurants dump untreated waste oil into sewers.