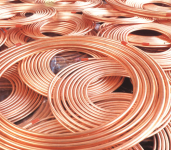 Japan’s output of copper and copper-alloy fabricated products increased 5.6 percent in October, climbing for the fourth straight month, as demand from home and overseas expanded, an industry group said.

Production, including sheets and tubes, rose to 69,540 metric tons last month from 65,866 tons a year earlier, the Japan Copper & Brass Association said today in a statement, citing preliminary data. Output was 66,710 tons in September, up 4.8 percent from a year ago.

Japan’s total exports grew 18.6 percent in October, exceeding the median estimate of 16.2 percent in a Bloomberg survey. The nation posted its biggest October trade deficit on record after costs for imported fuel surged in the wake of the nuclear industry’s shutdown. Imports climbed 26.1 percent, according to government data on Nov. 20.

The industry’s production for exports rose 20 percent to 11,295 tons last month from a year earlier, expanding for a seventh month, the group said. Output for domestic consumption gained for the second straight month, rising 3.2 percent to 58,245 tons, according to the association.

The country’s copper wire and cable shipments rose 11 percent to 66,400 tons in October from a year ago, the Japanese Electric Wire and Cable Makers’ Association said on Nov. 20. Shipments totaled 59,969 tons in September, up 4 percent from a year earlier, data showed.