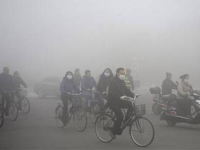 DAEGU, SOUTH KOREA – Japan, China and South Korea issued on Tuesday a joint statement stipulating their concerted efforts to resolve environmental issues such as the concentration of PM2.5 fine pollutants.

According to the joint paper, the three countries will put their cooperation priority on six categories, including reducing air pollution and protecting water quality and the maritime environment, while promoting multilevel collaboration involving municipalities, companies and researchers.

As measures to tackle the PM2.5 and other air pollution problems, the three nations will introduce to each other successful methods and technologies to make the air cleaner.

They also agreed to exchange observation data on PM2.5 and other particles to identify yellow dust’s travel routes and jointly study ocean pollution by garbage.

On the second day of their meeting, Ishihara, Li and Yoon explained their respective countries’ environment protection policies.

Pointing out Japan is beefing up PM2.5 monitoring by improving measurement systems and devices, Ishihara stressed that cutting the pollutants’ emissions should be given top priority.

At a press conference after the meeting, Ishihara said: “We were able to agree on specific cooperation measures against air pollution. Japan is willing to capitalize on its experience and technologies to reduce the pollution in the region.”

Ishihara met separately with Yoon Monday and agreed to exchange information on PM2.5 and bird influenza, but has failed to have individual talks with Li.

The next talks will be held in China.