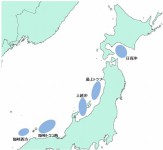 Japan’s industry ministry says it will start drilling surveys for methane hydrate (Fire Ice) resources in two offshore areas in the Sea of Japan next week. Officials from the ministry say the surveys are aimed at collecting geological samples to assess the amount of shallow deposits.

The frozen natural gas, or flammable ice, is seen as a promising energy source for Japan. One target area is located off Akita and Yamagata prefectures in northeast Japan. The other is off Niigata Prefecture in central Japan. A previous survey found that the Niigata area may also contain methane hydrate deposits.

The test-drilling is to start on Tuesday. The officials say a sonar survey that started in April found promising geological structures off the Niigata and Yamagata area — along with the seabed west of the Oki Islands in Shimane Prefecture, further to the west. The Agency for Natural Resources and Energy (ANRE) to Launch the FY2014 Survey of Shallow Methane Hydrate. For more details, click here.