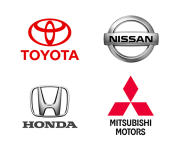 Japan’s 4 major carmakers have jointly set up an electric-car charging company to help expand the use of the vehicles across Japan.

Toyota Motor, Nissan Motor, Honda and Mitsubishi Motors established the new company on Monday, along with the Development Bank of Japan.

A major goal of the company is to build charging stations across Japan in hopes it will help boost sales of electric vehicles and plug-in hybrid cars.

Such vehicles currently account for only about 2 percent of cars sold in Japan.

The company will pay the installation costs of the chargers, worth about tens of thousands of dollars each, at shopping malls and other facilities. It will also foot the maintenance bill for the chargers for 8 years.

Several membership-based charging services are currently available in Japan, but users must sign up for each one separately as they are run by different companies.

The company plans to start its own service before the end of this year, which will allow its members to use any charger regardless of the operator.

The company is also planning to launch a mobile phone and smartphone service that lets users know which charging stations are available and alerts them when their cars have finished charging.

It aims to almost double the number of chargers across Japan to 12,000 before the end of this year.