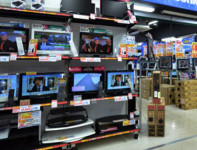 Major electric appliances retailers in Japan expect the current business year’s sales to remain as high as last year’s with higher profits. They believe the consumption tax increase will have little impact on their sales.

Yamada Denki, Edion and K’s Holdings have announced their results for the business year that ended in March. They all reported a rise in sales as consumers rushed to buy appliances before the tax went up on April 1st. Yamada’s fiscal 2013 sales grew more than 11 percent from the previous year. Edion’s sales jumped by almost 12 percent. K’s Holdings reported 10 percent growth.

The retailers had braced themselves for a dent in sales just after the tax hike. But they predict an improvement in the summer as consumers purchase energy-saving appliances to replace their old ones. The retailers also project operating profit increases in the 2014 business year through cost-cutting efforts.

Yamada forecasts a jump of almost 23 percent. Edion expects a two-percent rise and K’s Holdings an increase of almost five percent. But Yamada executive Jun Okamoto points to a weather factor. He says a cool summer could hurt sales of air conditioners and other appliances.