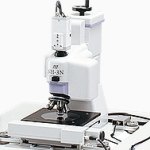 Mitaka Kohki manufactured the various industrial devices including a 3D measurement device and space observation device that was mounted on a rocket and satellite and subsequently used its accumulated technology to produce medical devices.
It successfully developed a neurosurgical microscope in 1988 and, always thinking from the standpoint of staff in the medical front, has designed and developed the medical devices, which the neurosurgeons in the world highly valued. Especially the operation environment was drastically improved thanks to the “overhead positioning stand” that held a microscope over doctor’s head while the device body was installed behind the doctor so that he or she could move freely.
Today, the latest version of the Cygnus microscope (modified into a much smaller overhead model to allow the surgeon greater ease of motion) has more than a 50% market share.

Mitaka Kohki is a major presence in the field of astronomical observational equipment. From its base next to the National Astronomical Observatory of Japan in the city of Mitaka, the company has developed a succession of innovative astronomical observation devices, culminating in the development of a special camera that was used by NASA onboard the Space Shuttle.

The company had technical alliance with Leica Microsystems in 1990 and started sales in the world market. The company’s products account for 15% of the total market share in the U.S. Currently it is developing a carbon-free solar power generation system and seawater desalination system as environmental countermeasures.
As a recent example, we succeeded in developing “Beamdown solar thermal device,” which collects solar light and generates energy by using high temperatures above 1,000 degrees Celsius. This device is attracting attention from the Sunbelt regions.