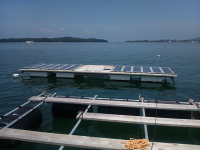 Feature of the Technology “Powersol” doesn’t rust because no metal on the surface. Projects Record
Power Bank System Co, Ltd., a developer and owner of the proposed technology, has conducted the following studies.