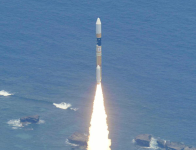 The rocket was launched from the Tanegashima Space Center in Kagoshima Prefecture at 12:05 p.m., Mitsubishi Heavy Industries Ltd. and the Japan Aerospace Exploration Agency said.

After separating from the rocket about 16 minutes after the launch, the No. 2 Daichi satellite was put into orbit around the Earth.

The new satellite is a successor to the No. 1 Daichi, which was decommissioned in May 2011.

While the large original Daichi was equipped with radar and an optical camera that could take stereoscopic photographs, its medium-sized successor carries only a high-performance radar that can be used even during the night and in bad weather, so that it can make smaller turns.

The Japan News
So far, 23 out of 24 H-2A rockets have been successfully launched, with Saturday’s launch the 18th success in a row.

The success rate is now 95.8 percent—above the 95 percent reliability standard widely accepted around the world.