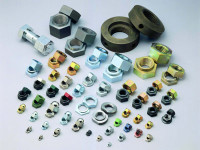 The Hard Lock Nut is extremely useful for dangerous places that are difficult to maintain, such as iron towers, long and large bridges and nuclear power generation plants, and is used in Japan’s Shinkansen trains, greatly contributing to infrastructure safety. With a record of more than thirty years of success, the product has earned a lot of customers’ trust from all over the world.

Developed and established the “World’s Strongest Hard Lock Nut” in 1974, taking a clue from the wedge. Established Hard Lock Co., Ltd. in 1977. Manufactures indispensable parts, although nuts that prevent loosening are not visible to the eye, they work behind the scenes to ensure safety.

How the edge works in the Hardlock Nut

Applying the Wedge Principle with Two Nuts
The idea behind the Hard Lock Nut is simple: it uses the wedge principle to lock the nut into place. Hammering a wedge between the nut and bolt is enough to prevent loosening. But this is not realistic in the real world, since it would require workers to drive in a wedge every time they screwed a nut and bolt together.
President of Hard Lock Industry, Wakabayashi racked his brains for a way to create a similar wedge-like effect using nuts alone. The solution he came up with was to use two differently shaped nuts for each bolt: one concave, the other convex. The concave nut (the upper nut) has a perfectly spherical concavity, but the convex nut (the lower nut) has a small eccentricity, with a thin wedge on one side and a thick wedge on the other. When the concave nut is tightened over the convex nut, the effect produced is the same as driving in a wedge with a hammer. Hardlock nuts are used in many applications, including TOKYO SKYTREE®, the 634-meter-high structure that has become the world’s tallest tower.

The Hardlock nut has been used in many Japanese machines and structures, including Japanese trains and the Shinkansen, Seto Ohashi and other bridges, pylons, high-rise buildings, and Tokyo Sky Tree, the world’s highest free-standing broadcast tower, just completed in 2012. Hardlock nuts are also used in other countries for applications such as high-speed trains in Taiwan, Great Britain, and Germany, and LNG supertankers and other vessels, where it has become a highly trusted component. In 2005, at the convention of the American Society of Mechanical Engineers, held in Denver, Colorado, it was scientifically proven that Hardlock’s wedge-reinforced nuts never come loose, and this has prompted worldwide attention to the product.

That product improvement is unending is an article of faith for President Wakabayashi, and his development of the world’s strongest nut that never comes loose has undergone many improvements.

Even though they are small companies, each manufacturer focuses all of its ideas and dynamism on its main business in order to create world-leading products. Japan’s manufacturing capability is supported by the insatiable zeal of small companies like these. The Seto Ohashi bridge, which accommodates an expressway and a railway, is also constructed with Hardlock nuts. A train on the British National Rail. This was the first high-speed railway overseas to adopt Hardlock nuts on a full scale.