Honda will be back to F1(Formula One) world 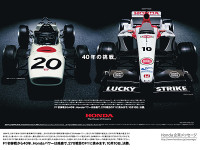 Honda Motor Co., Ltd. today announced its decision to participate in the FIA Formula One (F1) World Championship from the 2015 season under a joint project with McLaren, the UK-based F1 corporation.

From 2014, new F1 regulations require the introduction of a 1.6 litre direct injection turbocharged V6 engine with energy recovery systems. The opportunity to further develop these powertrain technologies through the challenge of racing is central to Honda’s decision to participate in F1. Throughout its history, Honda has passionately pursued improvements in the efficiency of the internal combustion engine and in more recent years, the development of pioneering energy management technologies such as hybrid systems. Participation in Formula 1 under these new regulations will encourage even further technological progress in both these areas. Furthermore, a new generation of Honda engineers can learn the challenges and the thrills of operating at the pinnacle of motorsport.

Commenting on this exciting development, Takanobu Ito, president and CEO of Honda Motor Co., Ltd. said:
“Ever since its establishment, Honda has been a company which grows by taking on challenges in racing. Honda has a long history of advancing our technologies and nurturing our people by participating in the world’s most prestigious automobile racing series. The new F1 regulations with their significant environmental focus will inspire even greater development of our own advanced technologies and this is central to our participation in F1. We have the greatest respect for the FIA’s decision to introduce these new regulations that are both highly challenging but also attractive to manufacturers that pursue environmental technologies and to Formula One Group, which has developed F1 into a high value, top car racing category supported by enthusiastic fans. We would like to express our sincere gratitude to Mr. Jean Todt, the President of FIA and to Mr. Bernie Ecclestone, the CEO of Formula One Group who showed great understanding and cooperation to help realize our participation in F1 racing. The corporate slogan of Honda is “The Power of Dreams”. This slogan represents our strong desire to pursue and realize our dreams together with our customers and fans. Together with McLaren, one of the most distinguished F1 constructors, Honda will mark a new beginning in our challenges in F1.”

The names of McLaren and Honda are synonymous with success in Formula One, and, for everyone who works for both companies, the weight of our past achievements together lies heavily on our shoulders. But it’s a mark of the ambition and resolve we both share that we want once again to take McLaren Honda to the very pinnacle of Formula One success. Together we have a great legacy – and we’re utterly committed to maintaining it.

I am very happy to hear about Honda’s important decision to return to Formula One with McLaren from 2015. The introduction of the new power train next year, in the form of a 1.6 litre, 6 cylinder engine with direct injection and energy recovery, is a very exciting challenge and demonstrates a vision for the future of the sport. I am sure that Honda will become a strong contender in the years to come.

It is a great pleasure to see Honda back in Formula One. Their engine technology and passion for motor sports make them a natural Formula One contender.

1964-1968:
Participated as an “all Honda” team including both the engine and chassis

1983-1992:
Participated as an engine supplier (Won both the driver’s and constructors’ championship titles for four consecutive years from 1988 through 1991)

2000-2005:
Participated as an engine supplier and joint developer of the chassis

2006-2008:
Participated as an “all Honda” team including both the engine and chassis

About Honda
Honda offers a complete lineup of cars and trucks through a network of more than 1,000 dealerships in the United States. In 2013, Honda marks 40 years of the Civic model, with more than 30 years of producing automobiles in the region, which began with the Accord in Marysville, Ohio in November 1982. Having produced more than 25 million vehicles in North America through 2012 using domestic and globally sourced parts, Honda currently operates 14 major manufacturing facilities in North America, producing a wide range of Honda automobiles, all-terrain vehicles, power equipment products, engines and transmissions.