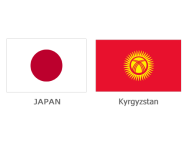 Japan will extend 120 million dollars in loans to Kyrgyzstan to help the Central Asian country’s efforts to promote democracy. Japanese Foreign Minister Fumio Kishida offered the loan at a meeting with Kyrgyz Foreign Minister Erlan Abdyldaev in Bishkek on Wednesday.

The meeting was held on the sidelines of a foreign ministerial meeting Kishida will have with his counterparts from 5 Central Asian countries.

Kishida says this is the first visit by a Japanese foreign minister to Kyrgyzstan in 10 years. He wants to promote the relationship between the 2 countries. He added Japan wants to fully back the nation’s efforts to promote democracy.

Abdyldaev says his country considers Japan its most important partner, and that it needs support. The 120-million dollar loan will be used on disaster prevention and to repair highways.