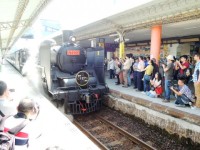 A CT273-model* steam locomotive, which had not seen active duty for 35 years carried passengers again yesterday as part of celebrations of the 127th anniversary of the founding of the precursor to the Taiwan Railways Administration (TRA).

With the whistle blowing and white smoke puffing out of its smokestack, the “Queen of the Steam Locomotives,” led a four-carriage train into the Changhwa Railway Station at 9am. Passengers and railway enthusiasts on the platform captured the moment on their cameras and mobile phones.

The 240 seats on the train for a trip between Changhwa and Ershui (二水) quickly sold out when they went on sale online last month.

Driver Liu Ken-yueh (劉耿岳) said the train was powered by the steam generated by burning coal, adding that the coal burner was right next to the driver.

“The temperature was quite high, and you really have to be able to bear it in the summertime,” Liu said, his clothes drenched in sweat. “Compared with electrical-powered trains, operating a steam train consumes a lot more of your strength.”

The locomotive was manufactured by Kawasaki Heavy Industries in 1943. It was used for the trains running between Taipei and Kaohsiung, and had a top speed of 85kph, making it the fastest train in service at the time.

The TRA stopped using the locomotive in 1979 and removed it from active duty in 1984.

In 1993, the Taiwan Folk Village (台灣民俗村) leased the locomotive to put it on display in the park. However, it failed to return the locomotive after its lease expired in 2008.

The TRA recovered the locomotive from the park in 2010 and placed it in the fan-shaped train depot in Changhwa.

Taipei Depot director Hong Chin-hsing (洪進興) said the locomotive was in a bad shape when the agency recovered it.

“Many of parts were rusty, and we had to tear down the locomotive to repair it,” Hong said. “Some of the parts were beyond repair and we had to redo them. The restoration of CT-273 was the most complicated and difficult task we have done.”

The TRA spent a little over two years restoring the locomotive so that it could become operational again, inviting retired technician Liu Shu-ken (劉樹根), 81, to supervise the restoration work, Hong said.