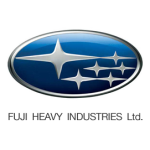 We have established our action guideline as “Confidence and Innovation” that stands for our brand statement “Confidence in Motion”. Keeping with the guideline, we will further evolve our engineering excellence in response to the demands of the times through every process in regard to product planning, engineering, manufacturing, marketing and service, and continue to provide the customer-oriented value to our customers.

Effective on July 15, 2003, the 50th anniversary of the company’s founding in 1953, FHI introduced the new 6-star corporate symbol and logo design for the Subaru automotive business, to project a new brand image in the future.

Subaru:
Adopted in March 1958, Subaru refers to a group of stars also known by its original Japanese name, mutsura-boshi, or series of six stars. This group of stars-known in Western countries as the Pleiades-belongs to the Taurus constellation and is the basis of the Subaru trademark. Subaru automobiles were the first to bear a name derived from the Japanese language.
Click here for more details.

Are you Subaru lover? Check it out Subaru gear and parts below!