Japanese firm to expand the “energy from waste” business in Europe 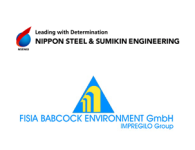 NIPPON STEEL & SUMIKIN ENGINEERING CO., Ltd (NSENGI) is pleased to announce that NSENGI has purchased and acquired 100% of the shares in Fisia Babcock Environment GmbH (FBE), based in Gummersbach (Germany), an environmental plant engineering company, from Salini-Impregilo S.p.A., based in Milan (Italy), on the 19th of March, 2014.

NSENGI, with 42 reference plants (40 plants in Japan, 2 plants in South Korea), is the world’s leading supplier of waste gasification and melting technology with its Direct Melting System (DMS) technology. NSENGI holds the record for the construction of the largest waste gasification and melting unit (capacity 30 t/h) and the most extensive length of time in operation of a single facility (30 years). NSENGI is currently marketing the DMS-technology in Europe to meet the demands arising from the introduction of government policies and legislation on the promotion of renewable energy from waste and restriction on direct landfill disposal.

FBE, founded in 1824 by one of the preceding companies, is an environmental plant engineering company, whose primary business is the energy-from-waste (EfW) plants based on grate incineration technology (grate), and among others, flue gas treatment plants for industrial processes and thermal power plants. FBE’s core business region is Europe, but also has a global presence with over 1,200 reference plants worldwide. More than 500 units thereof are based on grate technology. This extensive number of plants demonstrates the reliability of the company and the products. Additionally, the capability of building large-scale EfW-facilities (waste throughput over 50 t/h per single line) and the world’s leading power generation technology (steam temperature up to 500°C, pressure up to 90 MPa), brands FBE as one of Europe’s main players in the EfW-market.

NSENGI and FBE’s EfW technologies (DMS and grate, respectively) and business regions do not overlap, but complement one another. Thus, by integrating FBE into the NSENGI group, NSENGI expects a high synergy effect; both companies will be able to utilize each other’s business assets and brand strengths, and add values to one another’s existing technology through mutual sharing of knowledge and experience. Such synergy effects and their potential to enhance NSENGI’s business was the deciding factor in making this investment.

“This collaboration of businesses will allow the NSENGI group to expand its EfW business besides the core markets Japan and Europe in the growing global market and thus becoming the world’s leading environmental plant engineering company,” NSENGI president Makoto Takahashi said.