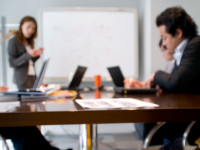 The Japanese government is stepping up its efforts to tap the power of women as part of its growth strategy. Officials are considering requiring large companies to disclose the percentages of women on their boards of directors.

The government aim is to get businesses to fill some 30 percent of their managerial posts with women by 2020. Prime Minister Shinzo Abe says empowering women is key to Japan’s future.

Currently, only 1 percent of the board members at listed companies in Japan are women, lagging far behind France’s 28 percent and the United States’ 16 percent.

To encourage executives to promote more women, the government is looking at requiring the publication of percentages of female board members in financial reports to facilitate comparison between companies.

Government officials say they hope to include the requirement in a new growth strategy to be compiled by June.