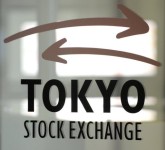 The Tokyo Stock Exchange on Tuesday officially absorbed the smaller Osaka bourse, creating the world’s third-largest stock market on a par with London.

The move inflates the combined market to about 3,400, up from Tokyo’s previous 2,300 stocks, and values the market at about $4.4 trillion, according to the Tokyo Stock Exchange. The total also includes hundreds of firms listed on the Jasdaq start-up market.

The first day of trading for the combined bourse follows the January 1 creation of the Japan Exchange Group, which said the merger would help save costs and boost the nation’s securities market as it faces stiff competition from overseas rivals following a flurry of similar mergers.

Derivatives markets and their trading systems will be consolidated in Osaka by March next year, fully completing the merger.

“We’ll make utmost efforts to become not only a surviving market but a winning market,” he said.

The integrated bourse is on par with the London exchange in terms of market value in US dollars, behind the world’s top NYSE Euronext, which operates the New York Stock Exchange, and second-ranked Nasdaq OMX Group, according to World Federation of Exchanges data.

The Osaka exchange is derivatives-trading focused while Tokyo’s exchange is the centre of share trading in Japan, with leading names including Toyota, Sony, Panasonic and Canon.