Uzushio Electric (Head Office: Imabari City, Ehime Prefecture, CEO & President: Masato Oda) is pleased to announced that it has received notification that it has been named as the successful bidder for the Republic of the Philippines Department of Energy (DOE) E-Trike Project promoted by financing from the Asian Development Bank (ADB).

There are currently over 3.5 million tricycles on the roads in the Philippines used as a means of transport by citizens and these are a cause of serious air pollution due to the exhaust gas that they emit. The government of the Philippines has announced a project to replace 100,000 existing tricycles with electric tricycles (E-Trikes) with the aim of improving the environment. This project to replace conventional tricycles with E-Trikes is also expected to increase driver income and promote employment through establishing new industries. 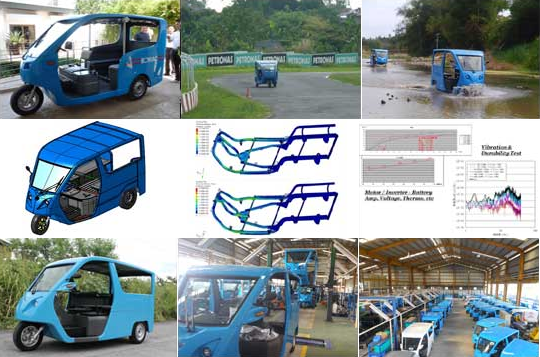 Uzushio Electric is Japan’s No.1 large ship outfitter, mainly manufacturing and working on electric power distribution equipment for execution of works and plants on land and manufacturing equipment to control, distribute electricity to and communicate with ships since 1946. Utilizing the knowledge of electrical machinery that we have cultivated in the shipping sector, we launched a new EV project in April, 2011 and, since then, have continued to research and develop focusing on lithium ion battery management (BMS) technology. After the DOE announced the E-Trike Project, we began developing E-Trikes in 2012. In December of the same year, we completed a prototype. In addition, we established a local subsidiary in March, 2013 and from December, 2014, as BEMAC ELECTRIC TRANSPORTATION PHILIPPINES INCORPORATED, we prepared the establishment of sales networks and manufacturing systems in the Philippines, created systems that make the yearly manufacture of 6,000 vehicles possible with the cooperation of local partner companies and are manufacturing our independently developed 68VM vehicle and have started selling it locally.

Bidding guidelines for the 3,000 E-Trike Plan were announced in February, 2015 and we participated in the bid that was carried out in May. Four other companies also participated in the bid, which was followed by a technical review and we were the only company that reached the opening of the bidding price which was conducted in August. As a result, we obtained negotiating rights and further negotiated price with the DOE and the ADB and then received official notification of our successful bid. The bid price was USD 30,747,000. The contract will be signed and we will then begin delivery of the vehicles.

After the introduction of these 3,000 vehicles, the DOE is planning to replace another 17,000 vehicles with E-Trike. Uzushio Electric plans to actively participate in future bids in order to contribute to the improvement of the aerial environment and the development of the economy in the Philippines. At the same time, we plan to expand the sale of the 68VM other ASEAN countries where we expect there will be demand such as Vietnam, Thailand and Indonesia and to contribute to reducing the environmental load through EVs.