Home » Reports » Japanese researchers succeeded in controlling the progression of ALS, in mice by transplanting cells made from iPS cells
0

Japanese researchers succeeded in controlling the progression of ALS, in mice by transplanting cells made from iPS cells 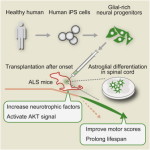 A group of Japanese researchers say they have succeeded in controlling the progression of ALS, also known as Lou Gehrig’s disease, in mice by transplanting cells made from iPS cells, or pluripotent stem cells.

Professor Haruhisa Inoue and his team at the Center for iPS Cell Research and Application at Kyoto University announced the achievement on Thursday.

ALS(Amyotrophic lateral sclerosis) is a fatal neuron disease that causes a progressive degeneration of the muscles. Doctors estimate nearly 9,000 people in Japan suffer from it.

The group first used human iPS cell to form “glia cells” that aid the work of motor nerves. They then transplanted the glia cells to the spines of mice that had symptoms of ALS.

They say the average lifetime of the mice without the transplant was 150 days. But the mice that underwent the procedure lived 162 days, nearly 8 percent longer.

The researchers also found the protein that activates motor nerves increased in the mice spines that received the transplant.

Professor Inoue said that after further study, their method could be applied to the treatment of humans. Summary
Transplantation of glial-rich neural progenitors has been demonstrated to attenuate motor neuron degeneration and disease progression in rodent models of mutant superoxide dismutase 1 (SOD1)-mediated amyotrophic lateral sclerosis (ALS). However, translation of these results into a clinical setting requires a renewable human cell source. Here, we derived glial-rich neural progenitors from human iPSCs and transplanted them into the lumbar spinal cord of ALS mouse models. The transplanted cells differentiated into astrocytes, and the treated mouse group showed prolonged lifespan. Our data suggest a potential therapeutic mechanism via activation of AKT signal. The results demonstrated the efficacy of cell therapy for ALS by the use of human iPSCs as cell source.