On February 20 2015, a consortium consisting of Mitsubishi Heavy Industries, Ltd.; Mitsubishi Corporation; Hitachi, Ltd.; The Kinki Sharyo Co., Ltd.; and Thales received a Letter of Conditional Acceptance from the Qatar Railways Company (Qatar Rail) for a systems package for the Doha Metro, the first metro system to be constructed in the State of Qatar. This is one of the world’s largest projects for a single metro system. Construction is scheduled for completion by October 2019. 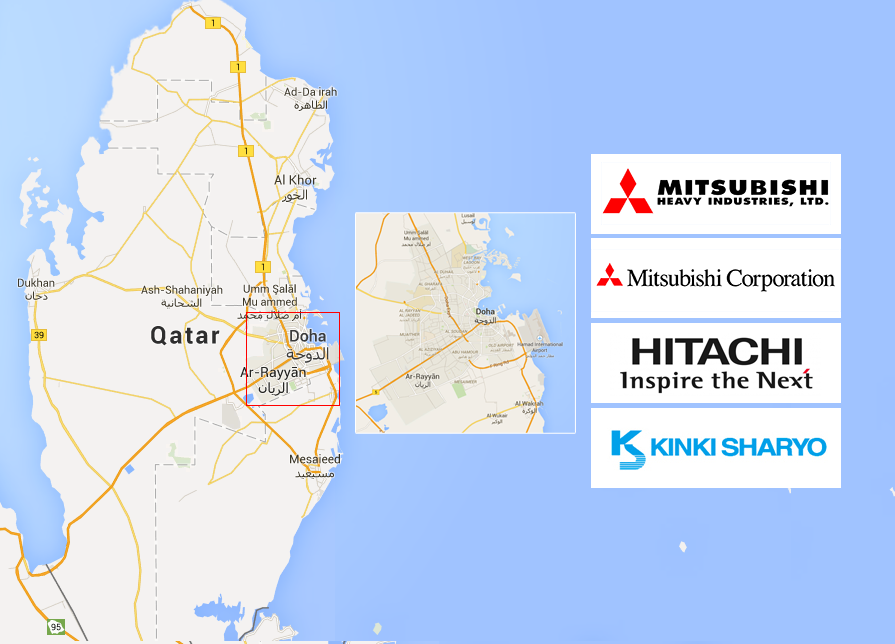 Qatar Rail is the owner and manager of Qatar’s rail network and responsible for the design, construction, commissioning, operation and maintenance of the entire rail network and systems. Phase 1 of the Doha Metro network will be launched in 2019; it is implemented by multiple Joint Ventures involving renowned Local and International contractors.

The newly accepted package calls for turnkey construction of a fully automated driverless metro system. Included are 75 sets of three-car trains, platform screen doors, tracks, a railway yard, and systems for signaling, power distribution, telecommunications and tunnel ventilation. The package is also expected to include maximum 20-year maintenance services for the metro system after its completion.

“The Doha Metro ongoing works are being done according to our timeline that we set at the beginning of the project,” Qatar Rail’s CEO Eng. Saad Ahmed Al Muhannadi said. “In 2013 and 2014, we signed many agreements that reached a remarkable value promising to deliver the best standards of metro railway in the near future. Today, with the Five Member Japan Consortium led by Mitsubishi Heavy Industries, we look forward to add more value to our project knowing the international expertise of the Japanese fellows and provide Doha with a fully secure and automated driverless metro system.”

The Doha Metro will run through the city of Doha and will consist of 4 lines in 2 phases – Red, Green, Gold and Blue – covering a total distance of 241 kilometers with 106 stations, of which 123 kilometers will be constructed underground. The new metro system will connect the main areas of Doha, including the Hamad International Airport opened in April 2014, the Old City, and newly developing inner city areas such as West Bay and Lusail.

After submitting its bid in March 2014, the consortium underwent 11 months of detailed negotiations. The Letter of Conditional acceptance was ultimately received after convincingly demonstrating to the client the consortium’s high technical capabilities and robust track record in the construction of metro systems.

The Doha Metro project is also in line with the Japanese government’s vision to contribute to Qatar’s infrastructure development, a point that was confirmed during the Qatar Business Forum in August 2013.

On the strength of its economy driven by the oil and gas industry, in recent years Qatar has achieved one of the highest GDP per capita levels in the world. At the same time, however, the city of Doha is facing serious urban congestion due to its increased population and the growing number of cars operating in the city. In response, under Qatar’s master plan driven by the “National Vision 2030,” a mass transportation system has been planned to help alleviate the problem.

Many major cities in the Middle East are currently planning to develop advanced railway systems, and members of the consortium hope to leverage their industry leading experience with the Doha Metro and expand their business in the Middle East market. Through these initiatives they collectively aspire to contribute to the further development of the region in environmentally harmonious ways.