Investors bought a wide range of shares when the market opened on Thursday morning. In the afternoon session, the 225-issu Nikkei soared above the 19,000 level. The key index last hit that level in April 2000.

Market watchers also forecast the bond-buying program in the eurozone will direct more cash into stocks.

TOKYO—Tokyo stocks surged through the 19000 level Friday, as a strong buying appetite from pension funds and other investors helped push the market’s current winning streak to five weeks.

Analysts now see the 20000 mark as the next milestone for the Nikkei Stock Average, which is currently leading all major Asian markets with a 10.3% year-to-date gain. 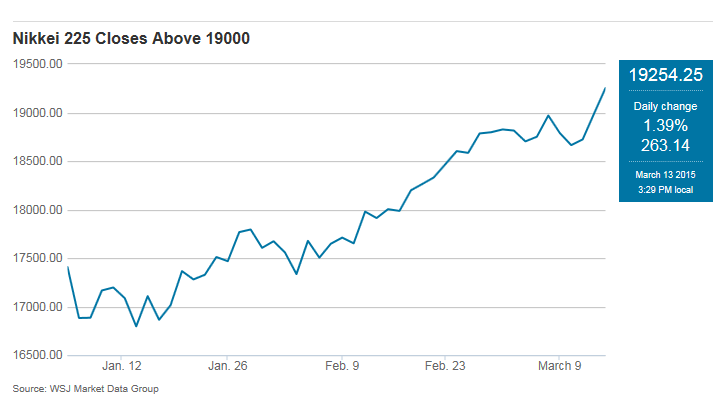 Stocks benefited from a powerful overnight rally in U.S. shares on the back of passing grades for 29 of 31 banks on stress tests administered by the Federal Reserve.

“Underlying buy support remains strong—especially from domestic institutions, defying high valuations,” said Toshihiko Matsuno, senior strategist at SMBC Friend Securities. “With the changes to asset allocations at major investors such as the Government Pension Investment Fund and others to favor more equity exposure, the market looks like it’s on a path to 20,000.”