– One of Japan’s largest solar installations to provide equivalent power for roughly 30,500 households – 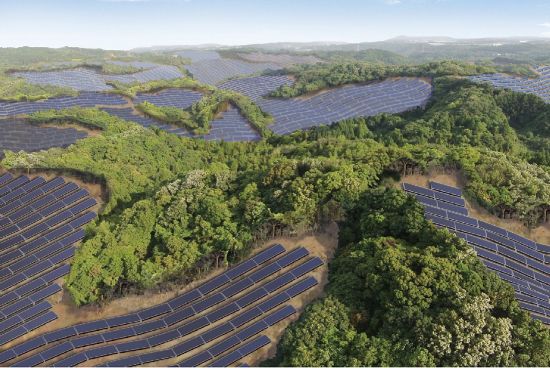 Project planning began in January 2014, as the local community expressed interest in effectively using the project site, which had been designated for a golf course more than 30 years ago but subsequently abandoned. Covering a total of approximately 2,000,000m2 (approx. 494 acres), the site will accommodate 340,740 Kyocera solar modules, and is expected to generate roughly 99,230MWh annually — enough electricity to power approximately 30,500*1 typical households, offsetting roughly 35,730 tons of CO2 emissions per year*2.

Under the agreement, Kanoya Osaki Solar Hills LLC will operate the site, and a joint venture established by Kyudenko and Gaia Power will undertake the design, construction and maintenance of the solar installation. Kyocera will supply its high-efficiency solar modules, and Century Tokyo Leasing will arrange financing. Approximately 35 billion yen (approx. USD290 million) in investment is planned for the project, with a goal to start construction in the second half of FY2016 (October 2015 to March 2016) and begin operations in FY2018 (April 2017 to March 2018).

The land development application for the project was submitted in April 2015, along with a year-long environmental impact assessment which has been completed. The massive installation will contribute to the local community through job creation and increase of tax revenues in Kanoya City and Osaki Town. The companies are cooperating with Kagoshima Prefecture, Kanoya City and Osaki Town to ensure environmentally friendly construction methods, and remain committed to promoting renewable energy as well as contributing to environmental protection and the creation of a sustainable society.

*1 Based on average annual use of 3,254.4kWh per household. Source: Federation of Electric Power Companies of Japan (Graphical Flip-chart of Nuclear & Energy Related Topics 2015)
*2 Based on calculations derived from standards created by JPEA