Accompanied by his wife Datin Seri Rosmah Mansor, Najib boarded the Hayabusa 15 Shinkansen train at 10.40am (9.40am MYT) to travel to Sendai city, about 325km away. 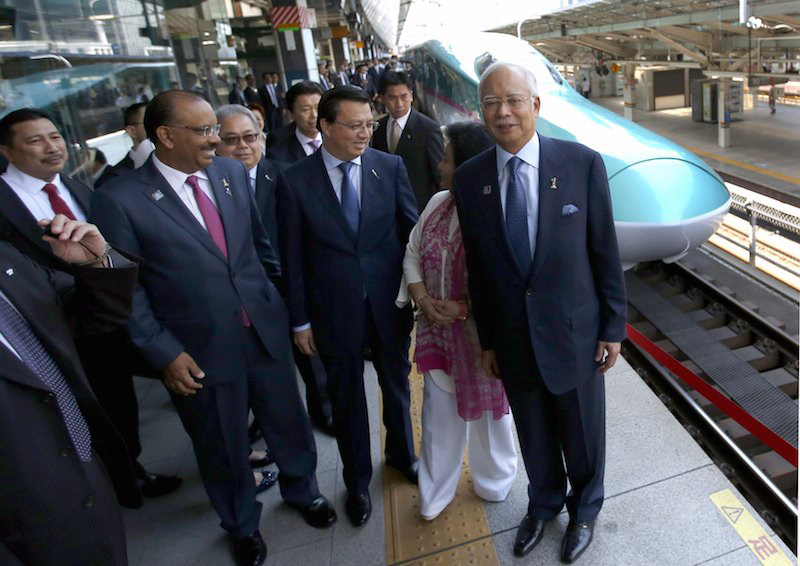 Earlier, Najib and the Malaysian delegation were briefed on the Shinkansen rail service and development around the Tokyo station by East Japan Railway Company officials, led by its chief executive officer, Tetsuro Tomita.

“I hope to see Shinkansen running on Malaysian land,” he told a joint press conference with Najib after their bilateral meeting at the Prime Minister’s Office.

In his response, Najib said he believed that Japan would submit a highly competitive bid when the time came. Introduced in 1964, the Shinkansen line now spans 2,400km and runs across Japan.

Early this month, Najib and his Singapore counterpart Lee Hsien Loong reaffirmed the commitment of both countries to the success of the high speed rail, which is expected to reduce the travel time between Kuala Lumpur and Singapore to just 90 minutes compared to more than three hours by road.

Besides Japan, several other countries like China, France, South Korea and Germany have shown interest in the project.

Japan is also reportedly lobbying to introduce the Shinkansen in the high speed rail project between Bangkok and Chiang Mai in Thailand, and Jakarta and Bandung in Indonesia. – Bernama, May 26, 2015.