Tokyo, March 12, 2015 – Mitsubishi Heavy Industries, Ltd. (MHI) has conducted ground demonstration testing of “wireless power transmission,” a new technology presently under development to serve as the core technology of the space solar power systems (SSPS) that are expected to be the power generation systems of the future. With successful completion of the test at the company’s Kobe Shipyard & Machinery Works, MHI has now verified the viability of long-distance wireless power transmission.

In the ground demonstration test, 10 kilowatts (kW) of power was sent from a transmitting unit by microwave. The reception of power was confirmed at a receiver unit located at a distance of 500 meters (m) away by the illumination of LED lights, using part of power transmitted. The transmission distance and power load mark new milestones in Japan with respect to length and volume of wireless power transmission. The testing also confirmed the performance of the advanced control system technology used to regulate the direction of the microwave beam so that it does not veer from the targeted receiver unit.

MHI conducted the ground demonstration testing based on an agreement with Japan Space Systems, the incorporated foundation that has been consigned by the Japanese Ministry of Economy, Trade and Industry to carry out the “2012 Solar Power Wireless Transmission Technology Development Project.” 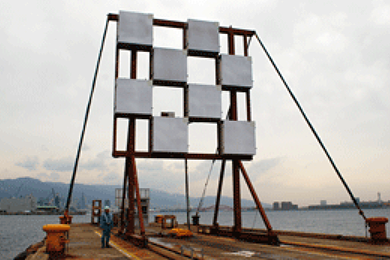 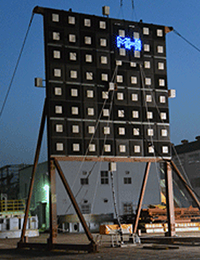 The wireless power transmission being developed for SSPS usage is referred to as a radio emission technology, and once the technology is achieved it will enable wireless transmission of power over unprecedented distances.

The SSPS is being developed as a system that will generate power on a geostationary satellite at 36,000 kilometers above the earth using solar cell panels; the generated power will be transmitted to earth by microwave/laser – i.e. without relying on cables – and the power received on the ground will be converted to electrical energy. As the power source is environmentally clean and inexhaustible, the SSPS is highly anticipated to become a mainstay energy source that will simultaneously solve both environmental and energy issues.

Going forward MHI aims to pursue expanded practical applications of this advanced aerospace technology in a quest to contribute to social progress, while simultaneously further advancing Japanese technology toward the realization of tomorrow’s SSPS’s.