TOKYO (Kyodo) — The Nikkei index logged 11 straight trading days of gains on Friday, the first such winning streak since February 1988, closing at a 15-year high as investors remained confident about the performance of domestic companies.

The Nikkei opened lower and flitted between positive and negative territory in the morning as investor sentiment was dented by losses in overseas stock markets on Thursday.

Investors continue to expect the Bank of Japan to prop up the market with the purchase of exchange-traded funds when stocks fall.

Comments in approval of yen weakness by Economic and Fiscal Policy Minister Akira Amari during the day fuelled expectations that export-oriented issues will continue to reap the benefits.

“Foreign investors also have a great interest in Japanese stocks at the moment and this is set to grow further as listed firms take steps to enhance corporate governance,” Hiwada said.

The Nikkei was helped further by gains in Asian stock markets during the day, particularly the Shanghai Composite Index, which re-entered positive territory in the early afternoon prior to Tokyo’s close after plunging 6.5 percent on Thursday.

Companies with strong links to China particularly benefited, with Fanuc rising 520 yen, or 1.9 percent, to 27,540 yen.

On the First Section, advancing issues outnumbered declining ones 970 to 774, while 140 ended the day unchanged.

Yahoo Japan leapt 58 yen, or 11.6 percent, to 556 yen, after announcing it will team up with China’s Alibaba Group Holding Ltd. on an e-commerce venture to sell Japanese goods in China. Major Alibaba stakeholder Softbank rose 83 yen, or 1.1 percent, to 7,447 yen.

Restaurant operator AP Company climbed 93 yen, or 5.3 percent, to 1,851 yen after announcing Thursday a buyback of up to 1.0 percent of its outstanding shares. 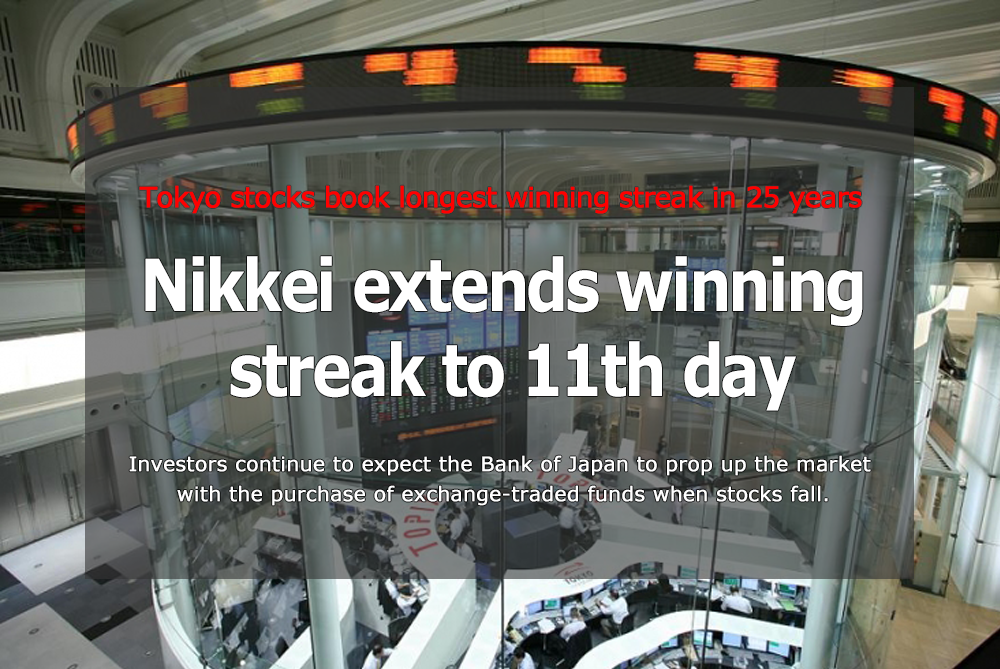