Chance to Win Roundtrip Ticket to Japan! – Taste of Japan

TOKYO, Oct. 16, 2017 – “Taste of Japan” is a website facilitating the dissemination of information on Japanese restaurants and cuisine culture worldwide, including details on Japanese restaurants all over the world, recipes for staple Japanese dishes, and explanations of signature Japanese ingredients. With the aim of spreading a love of Japanese food across the globe, the #TryTasteofJapan Photo Challenge was launched on Monday, October 16, for a run through Sunday, December 31, 2017, targeting the entire world outside of Japan. In this campaign, participants are asked to add the hashtag #TryTasteofJapan to photos of Japanese food and post them to Facebook and Instagram. A total of seven participants will be selected by lottery to win prizes, including a roundtrip ticket to Japan and meal tickets to Japanese restaurants overseas.

Moreover, the Taste of Japan website has been totally revamped with the aim of making it even more accessible to users. This includes improving search functionality and ease of use, adding French, simplified Chinese and Thai to make the site viewable in six languages, and expanding information on Japanese restaurants and Japanese Food Supporter shops. Search approximately 2,500 Japanese restaurants and 150 Japanese Food Supporter shops worldwide. 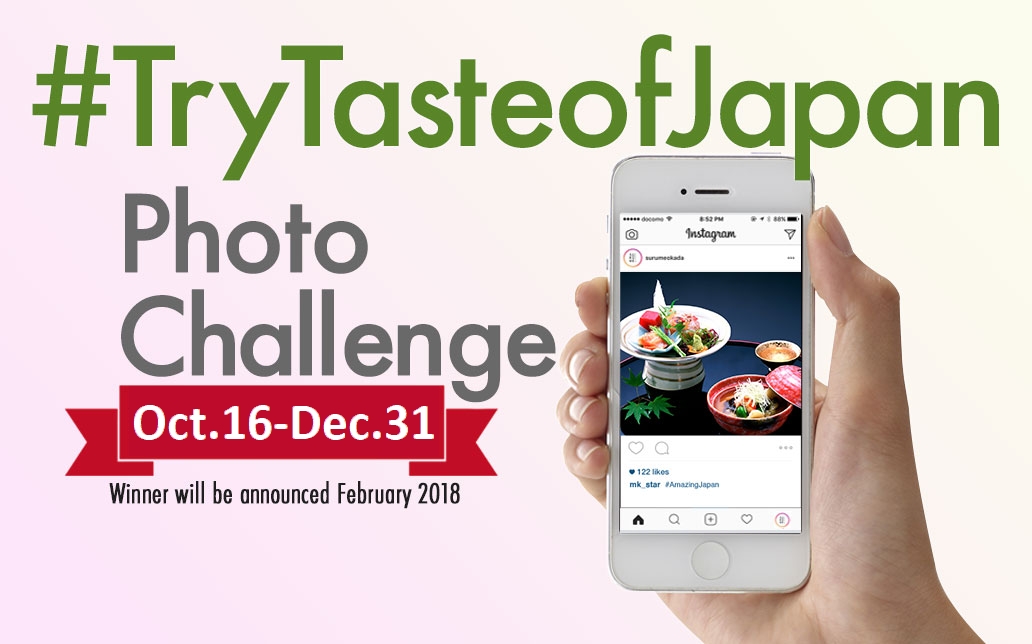 How to enter:
*As the purpose of this campaign is to raise interest in Japanese cuisine and Japanese ingredients, only the following posts will be considered:

Announcement of winners:
The aim is to notify (only) those who have been selected, via direct message over either social media platform, sometime in or after February 2018.