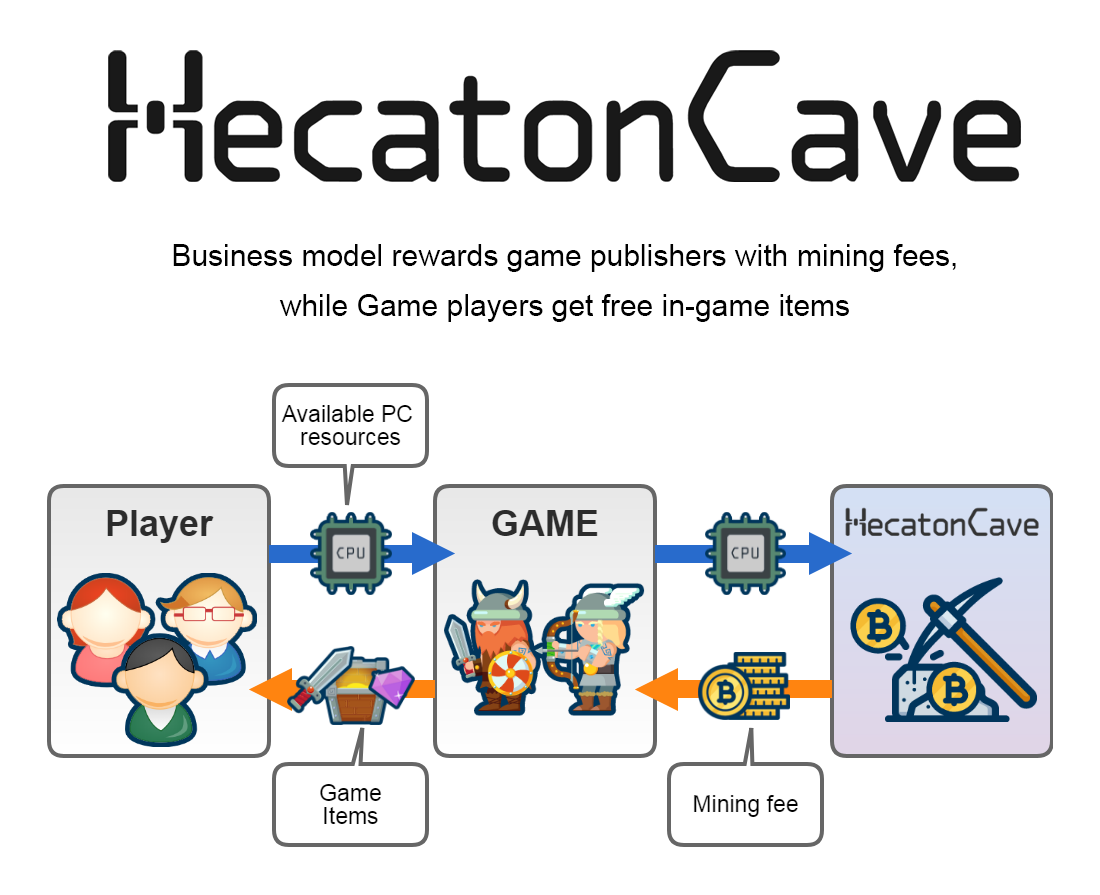 By effectively taking advantage of the untapped ability of game players’ terminal devices to facilitate virtual mining, HecatonCave provides benefits to both game players and publishers (marketers). It is also the world’s first service of its kind that can contribute to more widespread use of blockchain technology (according to a survey by SmileMaker).

A publisher that implements HecatonCave will, with the permission of the game player, be enabled to access the resources of the player’s PC or other terminal device from time to time to perform virtual mining to the extent that it does not interfere with the gameplay experience. The game publisher receives remuneration for performing the mining, which represents a new revenue source.

The game player, meanwhile, is rewarded by the publisher with a resource fee for providing access, to be paid in the form of game items and other rewards with game-internal value. Receiving game items enables the player to enjoy a more reactive game experience without paying fees. This helps resolve the sense of inequality that can emerge from differences in how much players are willing to pay to purchase items. In this way, it is expected to improve the soundness of games in the future.

SmileMaker anticipates that HecatonCave will be adopted by 30 client companies during its first fiscal year on the market.

Blockchain technology refers to dispersed network databases comprising distributed digital ledgers, or blockchains. One of the essential functions behind virtual currencies, blockchain technology is highly regarded for its reliability and potential scope of application. Mining refers to the computational work involved in the confirmation and recording necessary for the approval of blockchain transaction information (e.g., virtual currency transactions).

Demand for the application of blockchain technology, as well as the mining operations that back it up, is expected to increase in the future. At the same time, the size of investment required for the facilities it takes to produce enhanced computing power for mining operations has made new entry into the market prohibitively difficult for all but large companies. This difficulty is impeding the widespread use of blockchain technology. As HecatonCave is adopted by a wide range of games, however, it becomes possible to use personal computers and game machines all around the world for mining. This will facilitate the use of blockchain technology in a wide range of fields.

The name “HecatonCave” was coined by SmileMaker based on Hecatoncheires, the 100-armed giant of Greek mythology. The service name reflects the concept of a cave excavated by the work of multitudes.