Increased efficiency of wide-area collection and transport through transfer stations

The expansion of urban areas widens the garbage collection zone. It is possible to improve the efficiency of collection and transport operations in cities with widening collection zones by setting up waste transfer stations where wastes can be transferred from small- or medium-sized garbage trucks to larger trucks.

The cost of collecting and transporting garbage accounts for high percentage of waste disposal operations.
Improving the efficiency of collection and transport leads to cost reduction while maintaining or improving services to residents. 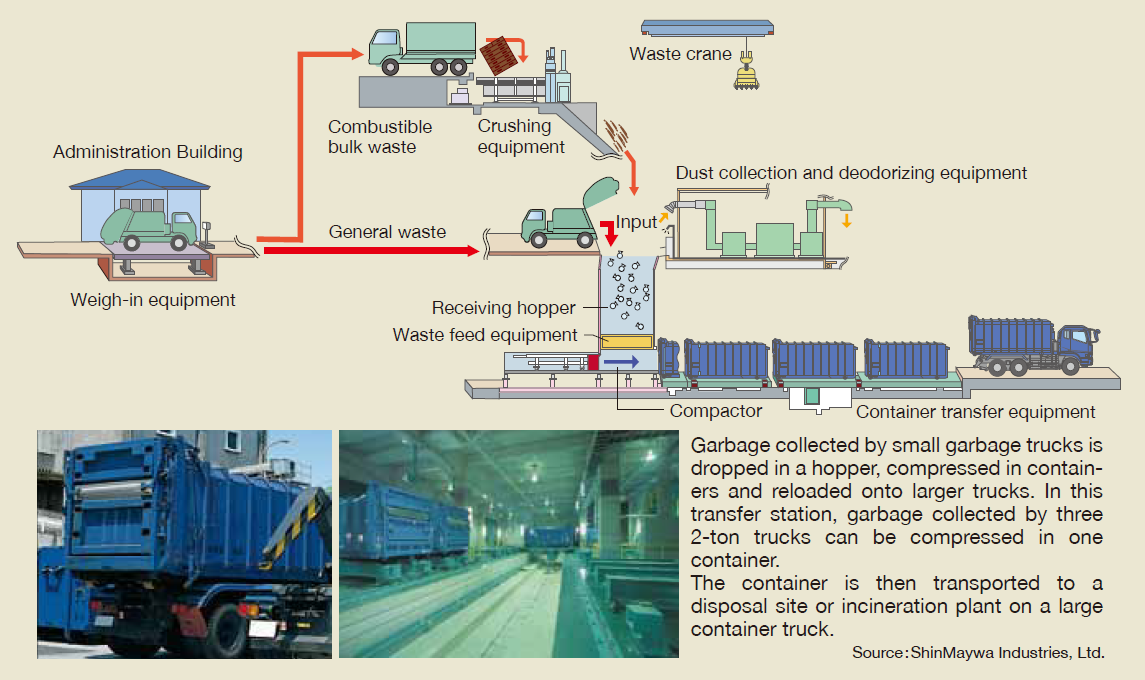 Overseas Case
Some Japanese enterprises have established joint ventures in China with high achievements in the production and sale of transfer stations. Some also sell them to other Asian countries.

Setting up transport station to streamline collection and transport operations

Transfer to larger trucks at transport stations improves transport efficiency and reduces fuel consumption by transport vehicles per garbage volume. This not only leads to cost reduction, but it also reduces CO2 emissions, contributing to the prevention of global warming. 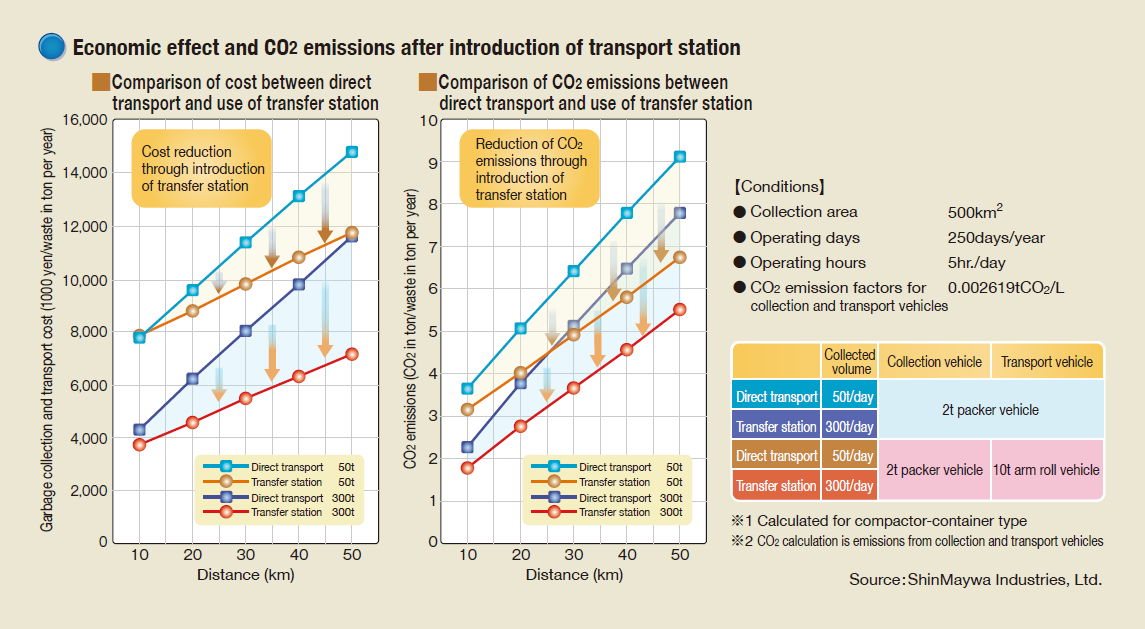 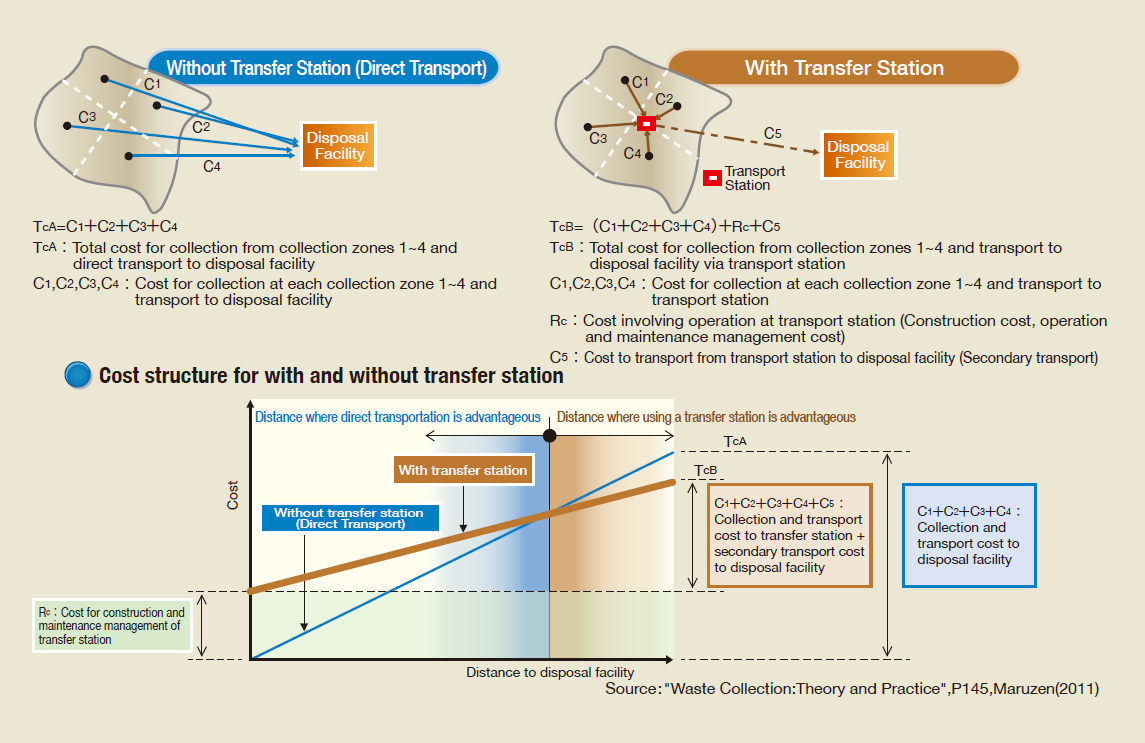 It would be more efficient in many of the Asian countries to use small collection trucks because of narrow roads. Many of the roads in Japan, too, are narrow, and 1t to 2t compact garbage collection trucks were developed with reduced body weight in order to increase load capacity.

There are two types of this garbage collection trucks – mechanical trucks (Mobile Packers) and
compressor-type trucks, but mobile packers are more commonly used. Packers scoop up the garbage with a
spinning disk and thrust it into the storage space with a sliding board. Garbage with high moisture content reduces compression efficiency; however, with continuous modification, trucks have achieved high compression rate, with 1.5 times more load than flat pile trucks.

Compressor-type trucks press down the garbage on to the floor with a compressor board (pressing plate), and after breaking it up and reducing volume, the garbage is slid into the storage area. The trucks efficiently collect large garbage requiring breakdown, bulky PET bottles and plastic waste.

Due to the worldwide problem of global warming, low-pollution-type garbage trucks, such as electric motor-drive and hybrid trucks are being developed and put into practical use. 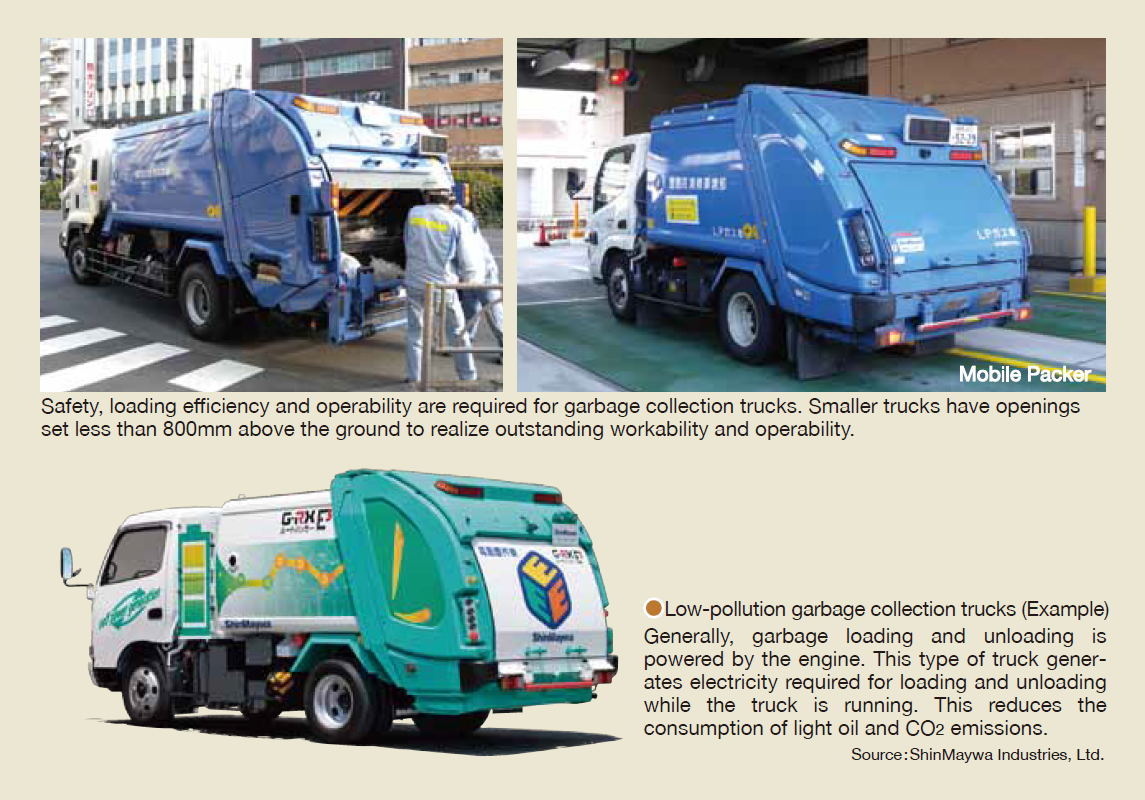 Energy from Waste Business Ministry of the Environment Waste Treatment