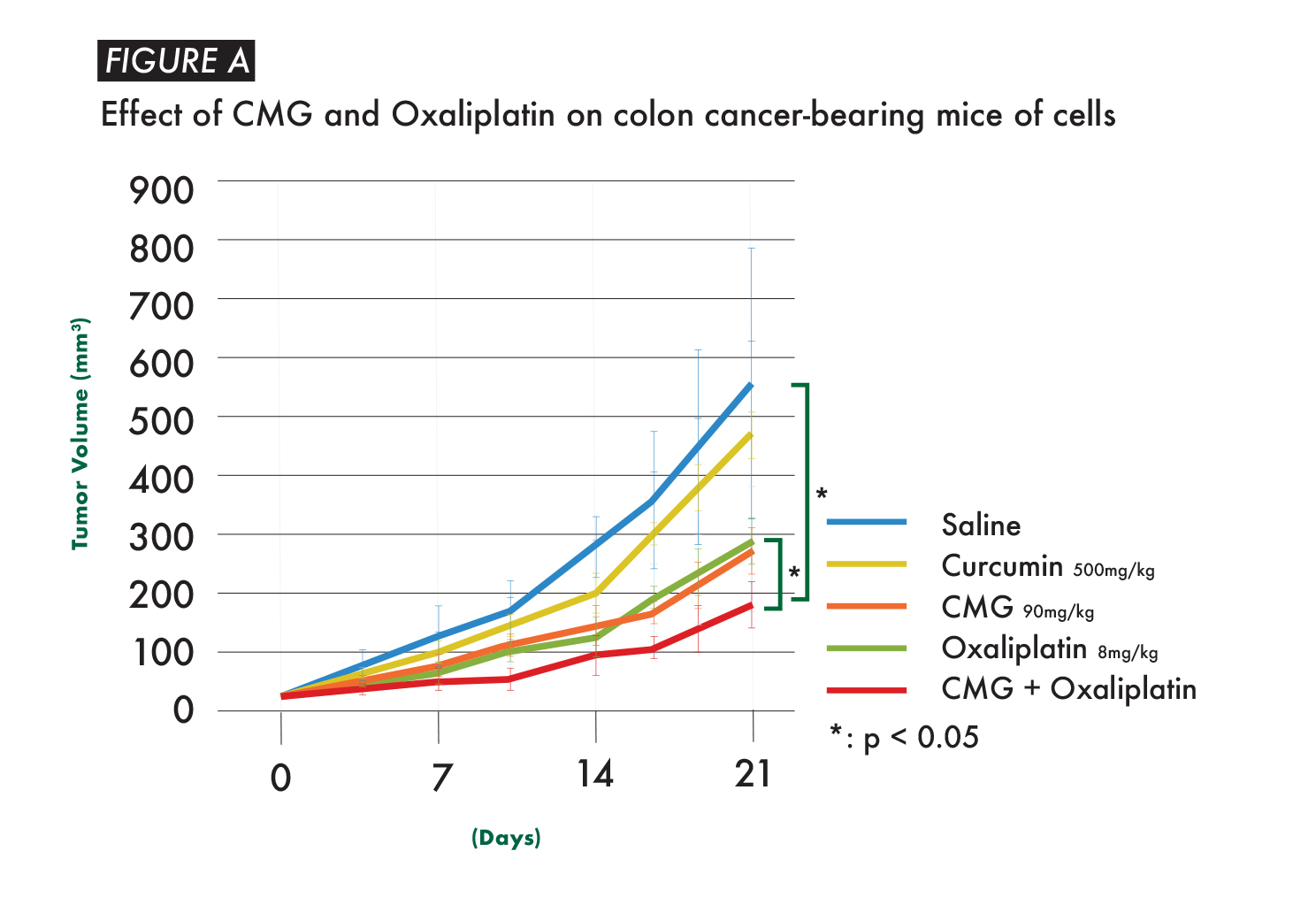 Figure A: CMG reduces the side effects of Oxaliplatin on liver functions, such as increases in both ALT and AST, which are the indicators of liver damage. 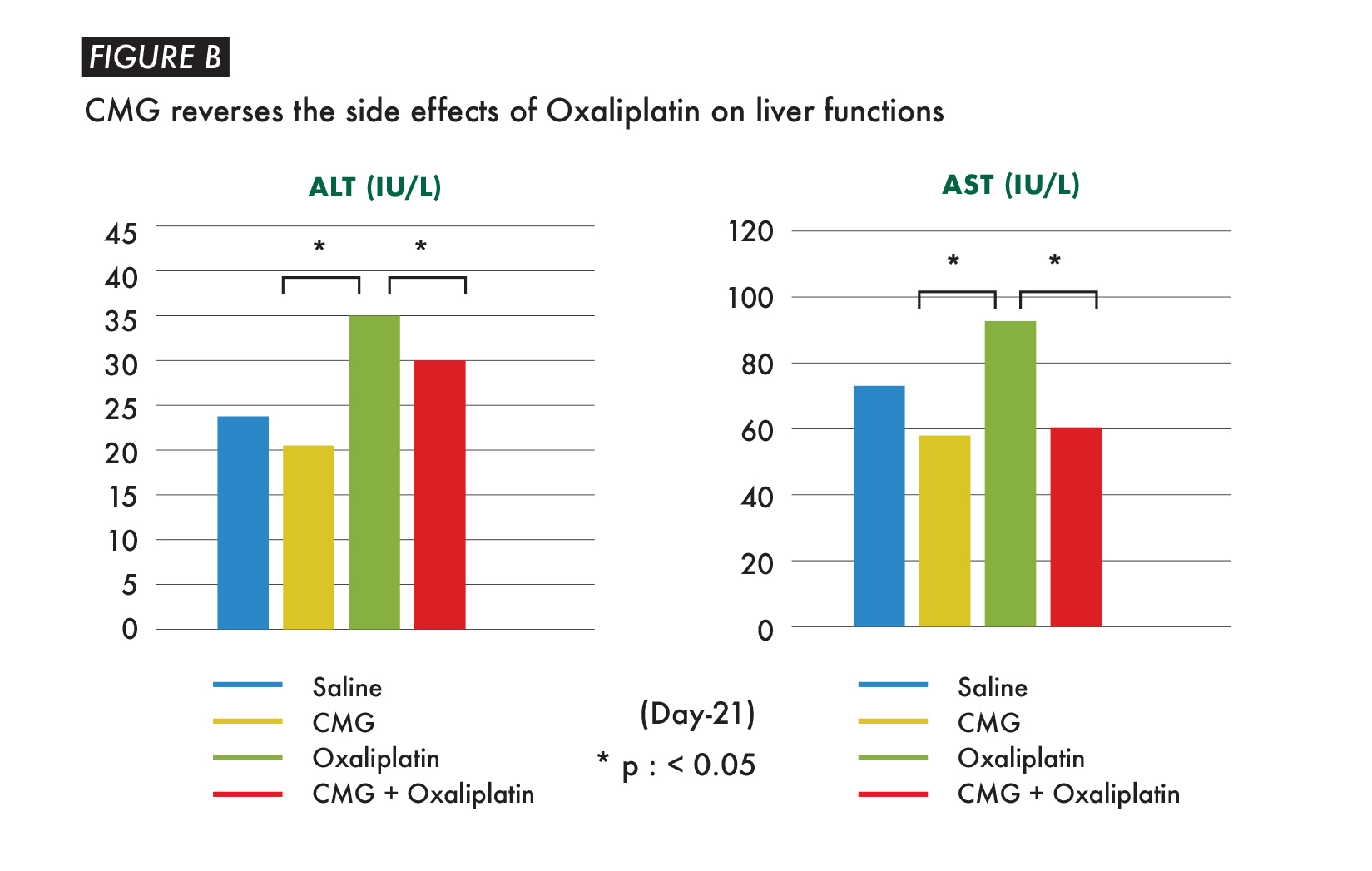 Figure B: At the same time, CMG clearly demonstrates its safety as:
No reduction in body weight of mice during the entire period of this test.
No reduction of number of white blood cells (WBC) and platelet (PLT) on Day 21.

Figure C: These novel and significant efficacies have been achieved by the unique nature of the injectable CMG (curcumin monoglucuronide) which can release 10,000 times higher amounts of the curcumin free form in the bloodstream than normal curcumin powder intake orally (patent applied). 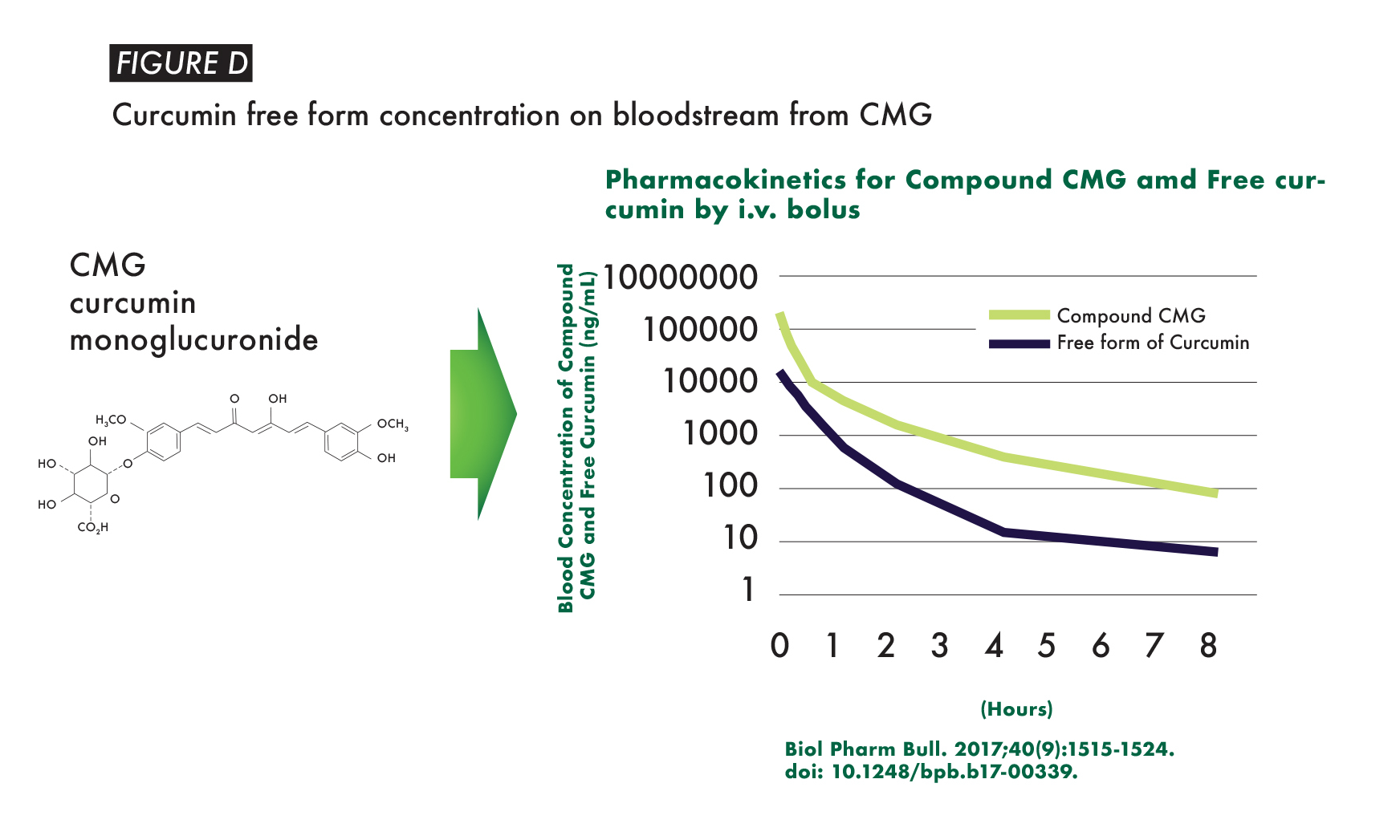 Figure D: Therabiopharma Inc. focuses on the development of CMG as a drug for various refractory cancers with/without other approved cancer drugs. In particular, it has a strong focus for treatment/drug resistant cancers with multiple mutations of genes.

Associate Prof. Kanai, PhD, MD, Graduate School of Medicine (Oncology), Kyoto University and the scientific advisor of Therabiopharma said from these findings and results, “The data shown here demonstrated that the efficacy of curcumin monoglucuronide (CMG) is comparable to that of oxaliplatin in mouse model. Of note, none of the toxicities associated with cytotoxic anti-cancer drugs including myelosuppression (decrease of blood cells), liver damage, and body weight loss were observed in CMG arm, while they were evident in oxaliplatin arm. In daily clinical practice, oxaliplatin is widely used as a key drug for cancer treatment including colorectal, pancreatic, or gastric cancer in the world. However, liver damage called “Sinusoidal Obstructive Syndrome (SOS)” remains one of the serious adverse effects of oxaliplatin. SOS could hamper the efficacy of oxaliplatin and sometimes causes symptoms derived from liver failure. In this preclinical study, addition of CMG to oxaliplatin showed the enhanced efficacy of oxaliplatin as well as protective effect against oxaliplatin-induced liver damage. These data support the idea that combination of CMG with oxaliplatin could be a promising option in cancer treatment.”

Prof. Kakeya, PhD, Graduate School of Pharmaceutical Science, Kyoto University and the scientific advisor of Therabiopharma said for these significant achievements on the newly developed CMG “This curcumin monoglucuronide (CMG), a water-soluble prodrug of curcumin, could be highly expected as an innovative synthetic anticancer drug based on the natural product contained in turmeric.”

T. Hashimoto, Therabiopharma CEO, said “These findings from the animal test on CMG efficacy demonstrate CMG may play an important and innovative role on the battle with cancers, particularly against the drug/treatment resistant cancer in which the mutations of genes are frequently observed.
CMG (curcumin monoglucuronide) has also proven its ability to work with existing cancer drugs to materialize the synergistic effect.”