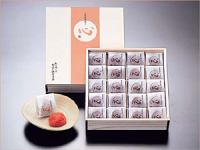 NAKATA FOODS is the largest manufacturing firm of ume product in the region. The firm manufactures “pickled umes” and “ume liqueurs” that are traditional health products in Japan, and “ume products” from Kishu Ume.

The firm celebrated the 100th anniversary in 1997 and honorarily welcomed the Emperor and Empress of Japan at the factory. In the same year, we also received Minister of Agriculture, Forestry and Fisheries prize.

About Ume
“Ume” (Japanese apricot) has played a significant role in protecting health and longevity of Japanese people since ancient times. “Kishu Ume” grows in genial climate and mineral-rich soil of Minami (southern) Kishu region and produces abundant ripe fruits. Minami Kishu is located in the southwestern part of Wakayama prefecture. It is a major production area of “Nanko-ume”, a kind of Japanese apricot that boasts Japan’s largest harvest and the prime quality.

About Umeboshi
Japan has a long history of preserving ume by drying and salting. This form of pickle is called umeboshi and was eaten for a variety of reasons. It was used to prevent food poisoning and food from going bad. This proves the antibacterial properties of the benzaldehyde contained in umeboshi.