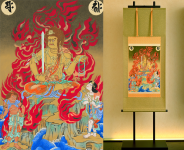 We wish for the new generation to breathe new life into Japanese cultural properties, keeping them alive for years to come 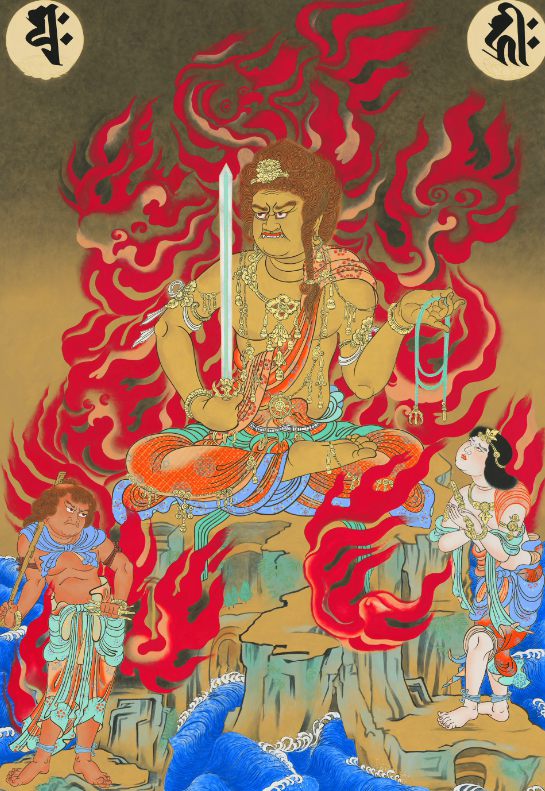 Color Painting on Silk of the Five Wisdom Kings

This product is a restored reproduction of a Buddhist painting that has been designated as a National Treasure entitled The Color Painting on Silk of the Five Wisdom Kings, which originally was completed approximately 800 years ago. The original painting is presently housed in the collection of Daigoji Temple, a UNESCO designated World Cultural Heritage Site in Kyoto.

University students helped complete the restored reproduction under the supervision and guidance of Toshiaki Yoshimura, professor at Seian University of Art and Design and leading authority in restoring and reproducing Japanese paintings. As a result, a traditional Japanese hanging scroll was made out of a meticulously digitalized version of that reproduced painting.

Colors that had been fading for over 800 years were scientifically analyzed, and parts that began to flake off were restored based on extensive research of Buddhist paintings composed during the same period. Fudō Myōō is a Buddhist guardian that was brought over to Japan by Kukai, posthumously known as Kōbō Daishi, from the Tang dynasty approximately 1200 years ago, and is presently adored as “Fudo-san” by a great many people who have faith in it.

It is believed that the guardian bestows practical benefits by warding off misfortunes and calamities and its infuriated facial expression purifies human desires. Moreover, this piece is considered highly precious since it is the first time that a hanging scroll was made based upon a replication of a National Treasure designated Fudō Myōō painting.
※ This product was manufactured by meticulously printing a restored and reproduced piece using the highest technical expertise known in Japan.

This is the first joint project in Japan to create a restored reproduction of a Buddhist painting that has been designated as a National Treasure through the tripartite alliance of religion, business, and education. The aim of this collaboration is to preserve and bequeath cultural assets and treasures of Buddhist temples and to pass down traditional restoration techniques to the next generation.

The Succession of Restoration Technique

Technological innovations have endowed humankind with many rewards and conveniences. However, it is also a fact that we have lost sight of the techniques, traditions, and practices that have once upon a time been transmitted in the past unremittingly from one generation to the next. Moreover, due to the ageing population of skilled artisans, it has become a problem to cultivate the next generation of specialists who are willing to become their successors. In the field of paintings, and especially in regard to reproduction techniques, the knowledge to restore and preserve important cultural assets is indispensable. The purpose of this project therefore is to foster human resources especially in this area of technical expertise.

Daigoji Temple, whose motto is “living and live cultural assets,” has teamed up with Seian University of Art and Design to offer courses on renovation and reproduction techniques. The temple provided unconditional access to the original color paintings on silk of the Five Wisdom Kings, which have been designated as National Treasure and holds important meaning from the perspective of faith, so that they could be given new life as reproductions of the original. 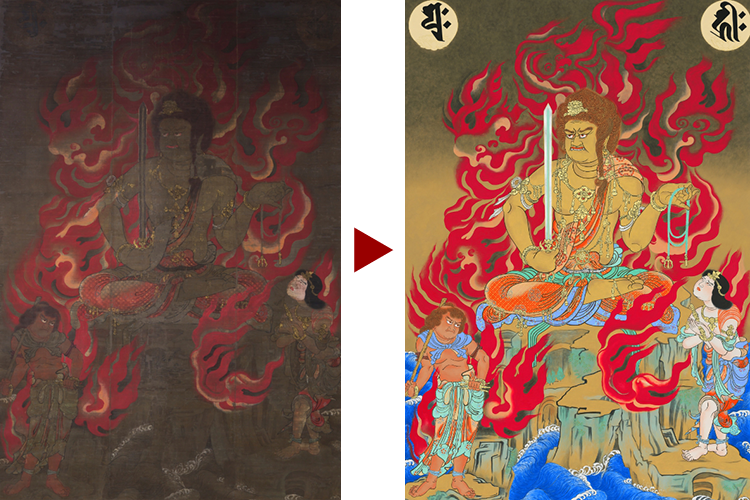 The Succession of Treasures at Daigoji Temple

Thanks to decisive measures taken by successive head monks, Daigoji Temple holds a total of approximately 15,000 items in its collection, and among these holdings, 69,419 items have been designated as National Treasure and 6,522 items as Important Cultural Property. A reproduction of the Five Wisdom Kings will be made available by Kosaido Company using a special printing procedure and merchandised to be sold in the form of hanging scrolls and the like.

A percentage of the sales will be donated to Daigoji Temple so as to help restore and preserve the many treasures of the temple’s collection. As such, another aim of this project is the creation of a system whereby the collection of treasures of Daigoji Temple will be preserved for future generations.

(Designated as a National Treasure on June 22, 1955)
The color painting on silk of the Five Wisdom Kings consists of Fudō Myōō (center), Gōzanze Myōō (east), Gundari Myōō (south), Daitoku Myōō (west), and Kongōyasha Myōō (north). These five kings come together for the performance of ascetic ritual practices (prayers and incantations) in the esoteric Shingon Buddhist tradition. The images of the Five Wisdom Kings on a complete set of five scrolls which date back to the Kamakura period can only be found in the collections of the Kyōōgokokuji Temple (Tōji Temple), the Kiburiji Temple, and the Daigoji Temple. They have all been designated as National Treasures.

The Five Wisdom Kings, which was reproduced from the collection of the Daigoji Temple, is famous for its powerful moving facial expression filled with rage on a majestic plane and considered to have been completed during the early Kamakura period approximately 800 years ago.

Daigoji Temple is the main temple of the Daigo School of Shingon Buddhism. It was established in 874 AD by the Buddhist monk Shōbō, posthumously known as Rigen Daishi, the Great Master of Holy Treasures, who was a second-generation disciple of Kukai, posthumously known as Kōbō Daishi. Due to the devout faith of three generations of emperors, i.e. Emperor Daigo (897–930), Emperor Suzaku (930– 946), and Emperor Murakami (946–967), the precinct of this important temple is now nestled between the base and top of a mountain and stretches far and wide toward the east along the mountain range of Mt. Daigo (Mt. Kasatori). 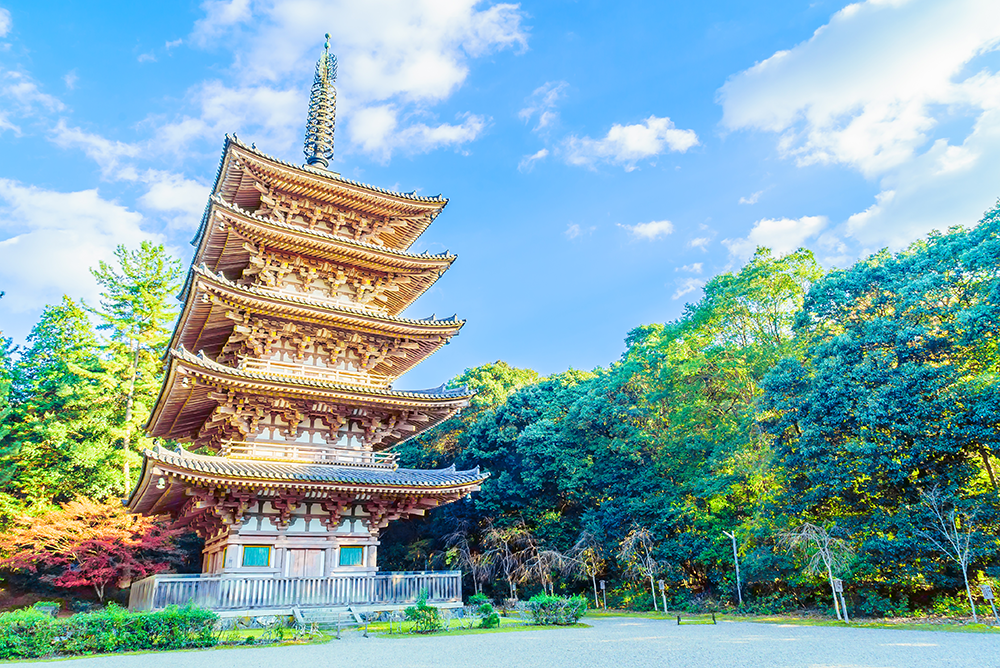 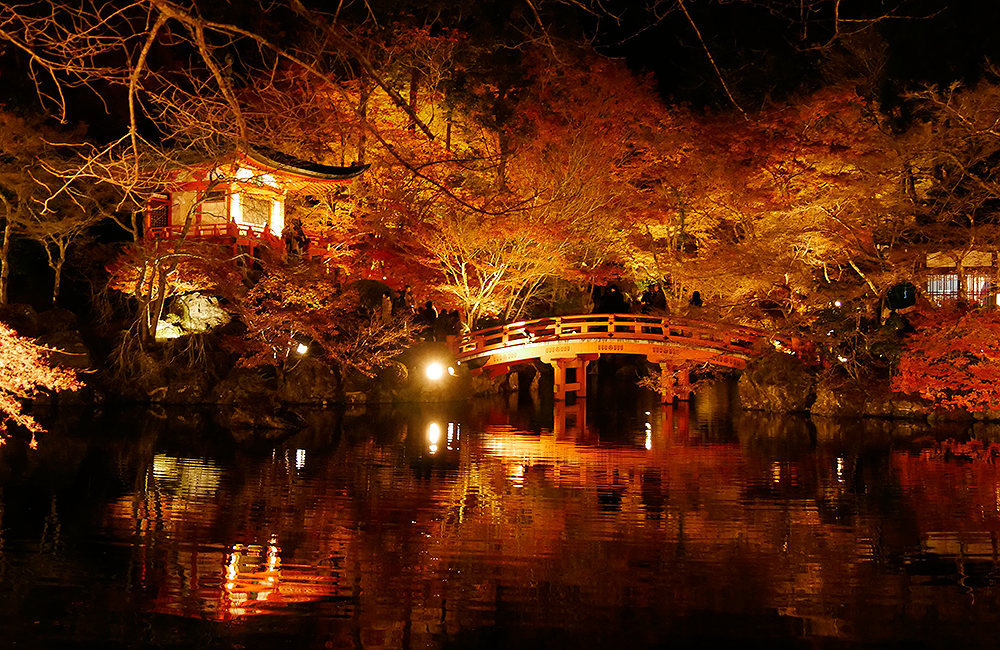 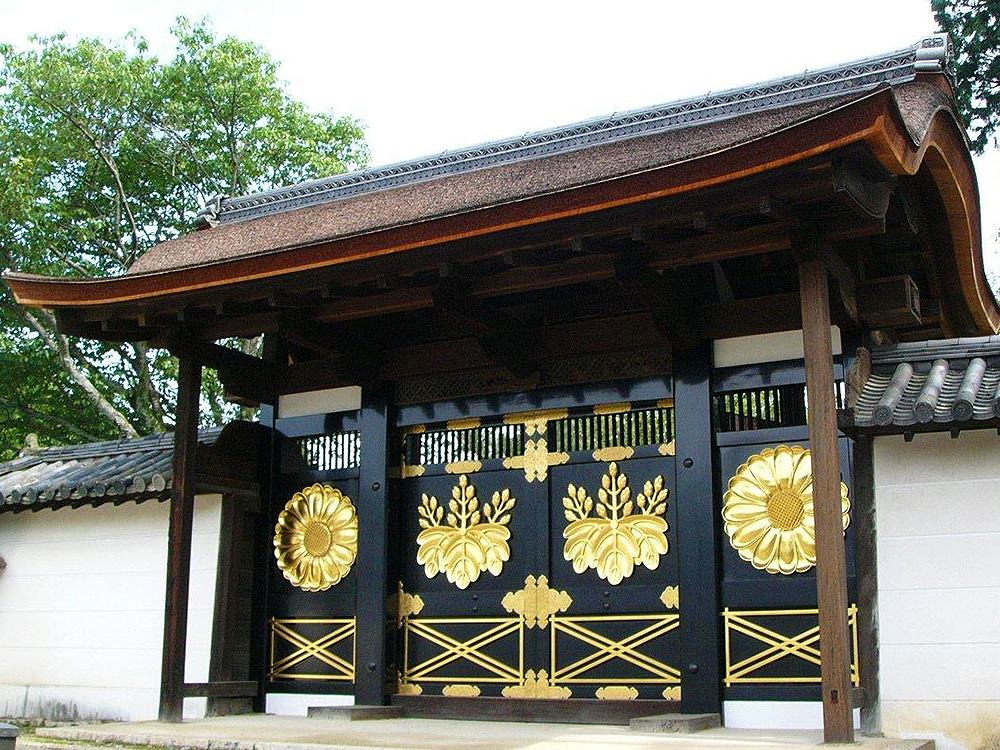 Moreover, Daigoji Temple also became a popular object of faith for members of the imperial family, the warrior and merchant classes, and even the general populace. It was also a special place for such personalities as Ashikaga Takauji, Ashikaga Yoshimitsu, Oda Nobunaga, Toyotomi Hideyoshi, and Tokugawa Ieyasu, and having gained the trust of such powerful figures of the day, the temple was beneficiary of their support and flourished as a leading temple for Shingon Estoteric Buddhism.

Daigoji Temple, which has a history of over 1,100 years old, holds an important position even within the history of Buddhism. Among the many kinds of temple treasures it has preserved over the many long years, 69,419 items have been designated as National Treasure and 6,522 items have been designated as Important Cultural Property. The total number of items in its collection amount to approximately 15,000 items. In 1994, Daigoji Temple became a UNESCO-designated World Cultural Heritage Site.