The microgrid system will power a total of 117 homes in Zone D4 of Smart City Shioashiya Solar-Shima, which is being designed and developed by PanaHome in Ashiya City, Hyogo Prefecture. On August 9, 2017, the project was selected as a part of the Ministry of Economy, Trade and Industry’s subsidy program to promote local energy production for local consumption by leveraging regional characteristics.

This is a joint project being carried out by PanaHome, ENERES, IBJ Leasing and the Public Enterprises Agency. The project concept is a “town interconnected by energy for living.” PanaHome purchased land that was developed by the Public Enterprises Agency. Panasonic Corporation and the City of Ashiya are also cooperating with the development of this project. A part of the project entails building Japan’s first (*2) microgrid system. Solar energy will be used to power 80% or more (*3) of the entire housing district. This will be made feasible by running private power distribution lines (*4) to the housing district and sharing power between homes. Even when the district becomes disconnected from the traditional electrical grid during emergencies, the private power distribution lines can continue to supply power via specific circuits. Private power distribution lines make it possible to receive power and flexibly set power rates. Consequently, this poses a number of benefits for homeowners including, a 20% cut in their electricity bill. Another key goal is to contribute to the environment, mainly by maximizing use of renewable energy to reduce CO2 emissions. Going forward this project will contribute to solutions for sharing electric power between buildings, preventing blackouts in areas overseas where power grids are weak, and in showcasing these solutions overseas.

Responsibilities of each project participant

In the wake of the Great East Japan earthquake, demand emerged for the introduction of distributed energy systems highly resilient to disasters. The quake made it apparent that centralized energy systems were vulnerable to such disasters. Meanwhile, it has also become necessary to flexibly offset the unstable supply of electric power with a considerable expansion in the use of renewable energy. In addition, there is a need to shift from the wider use of solar power via the feed-in tariff (FIT) scheme, to the expanded use of solar power sources via the effective use of local energy production for local consumption.

Since 1998, Hyogo Prefecture and the City of Ashiya have been carrying out development in the Shioashiya area, which is in the Minami Ashiya-hama district, based on the concept of urban development that connects people. From 2012, PanaHome embarked on the development of Smart City Shioashiya Solar-Shima, which is comprised of roughly 400 individual homes and 3 condominium complexes (total of 83 condos). The company’s highly energy-efficient buildings and its large-scale urban development which maximizes the use of renewable energy has won the company high praise, even from overseas. The company recently won a Gold Award in the “Smart Buildings” category of the 3rd APEC (Asia Pacific Economic Cooperation) ESCI (*5) Best Practice Awards.

Overview of the microgrid system and the specified supply (*6) scheme

A solar power generator (4.6kW), storage cell (11.2kWh) and HEMS (*7) has been installed in each of the homes in this project. Within the housing district, each home’s storage cell is connected by private power distribution lines. The storage cell control unit makes it possible to reverse the power flow current and mutually share electric power between homes. This is the first such microgrid system (regional energy distribution system) in Japan. 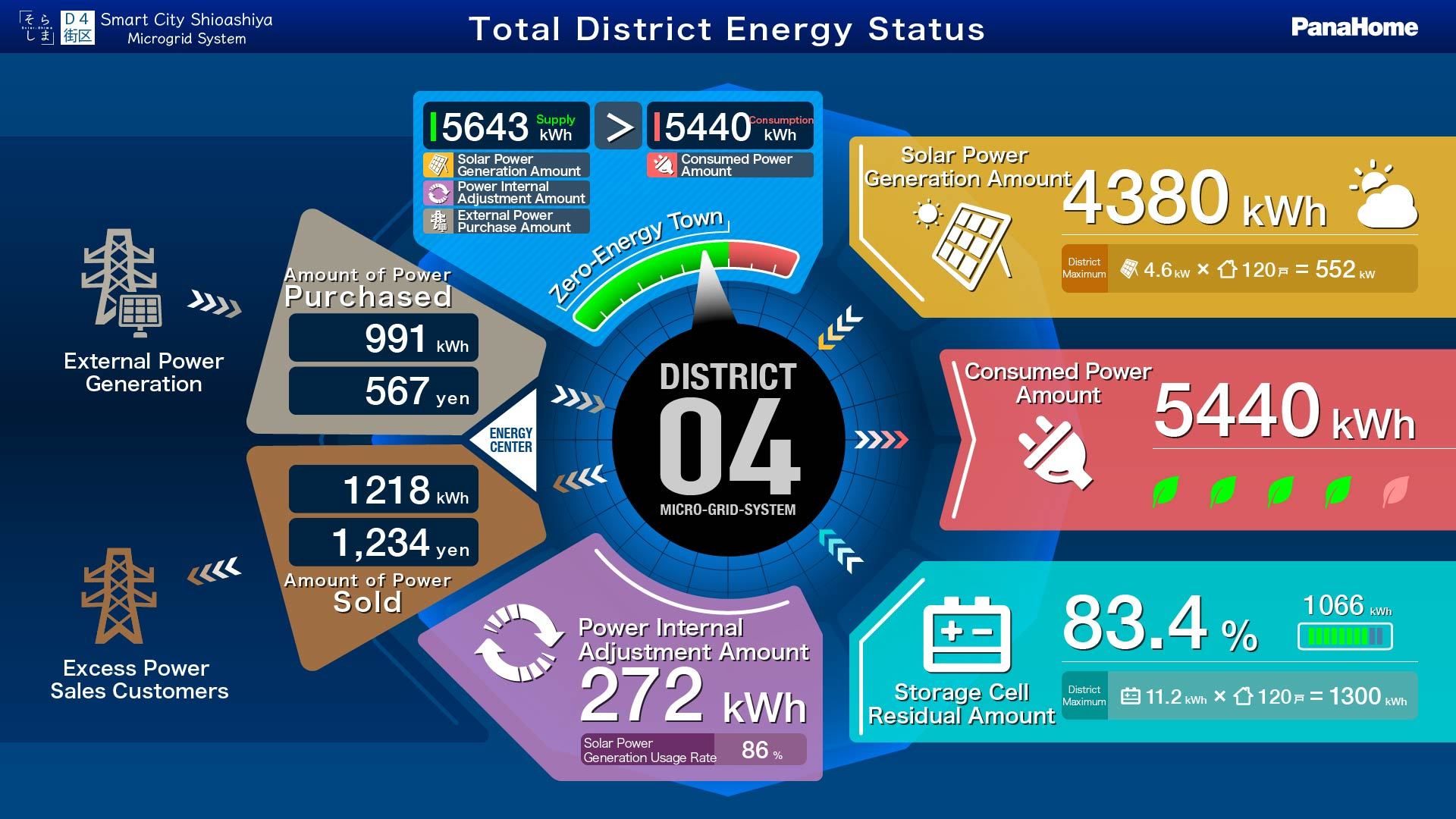 Features of the microgrid system

The management association consists of homeowners of the 117 homes in the residential district. The management association has outsourced the power storage cell control management to ENERES, a company with expertise in this area. Based on a specified supply scheme to control the supply of power from storage cells to association members (residents), it will be possible to operate an EMS (*8) system and provide power coverage to the entire district by employing IBJ Leasing’s environmental solutions, which were derived from its financial knowhow, to introduce private power distribution lines.

Overview of shared power among homes in the district

In this project, all homes are equipped with solar power generators, storage cells, and HEMS. The storage cells installed in each home are connected to form a network. The power stored in the storage cells (11.2kWh) can be shared by the 117 homes in the district. It is as if there is a giant storage cell with 1.3MWh of power. Homes with surplus electricity can share with homes that have a shortage of power. This reduces the need to purchase energy from external sources and maximizes the use of solar power generated within the district.

n addition to the deployment of a microgrid, a feasibility test will be conducted for the VPP control unit. When instructions, including demand response (*12) orders from the resource aggregator (*13), come from above, the goal is to control the inflow and outflow of power from storage cells in each home to address the increase or decrease of power consumption in the district, as if it were all functions as one power generator.